Can Vettel make it a 4th?

November 27, 2012
2010, 2011, 2012.. these 3 years would be treasured forever in Sebastian Vettel's life. The 25 year old German, who clinched his 3rd  consecutive title this Sunday in Brazil, certainly knows how to make his way from a small BMW Sauber team into one of the big teams, RedBull Racing.

In 2007, the german made it into F1. Indianapolis was the place and he started in 8th. On sunday, he became the youngest ever driver to score a point. 19 years and 349 days. It doesn't end there, in 2008, he worked as a full time driver for Toro Rosso. That year, he added another "youngest ever" to his list. After winning in a wet monza track, Seb became the youngest ever driver to record a win, 21 years, 73 days. Sebastian drove the very next year, with Toro Rosso's sister team, RedBull racing alongside the very experienced Mark Webber. He got them their first win and at the end of of the year, he was crowned vice-champion, beating Mark Webber and standing behind Jenson Button in the Brawn GP team. From 2010 onwards, its was Vettelism. 5 wins and a great way to his first championship. 2011 was 'Seb-ated', every race weekend, the boys in the Red bull garage had a reason to celebrate. 2011 season added more 'youngest ever' records and equalled many legends' records.
2012, was the craziest season ever! 7 different winners in 7 races, a championship that narrowed down to 2 just with 4 races to spare. Alonso and Vettel. And Seb emerged world champion among the 6 world champions on the grid. 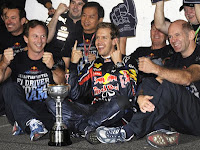 It wasn't "all credits" to Seb for his world championships. F1 is all about the synergy between the Car, Driver and team. Undoubtedly, Adrian Newey every year, designed the best car for Seb. But the optimization was left to the driver. And the car had to be in a good mood too. If she's not, then your race is doomed. Seb broke record, set records, but none of this matters.. why? Because he believes that he's in F1, not for the records, money, the fame and glamour, but because he loves motosport. A rare German breed, who loves Monty Python , tapes Little Britain and listens to ABBA and AC/DC defines Vettel.

"Crash-kid" and "cry baby" hasn't seemed to have affected him in any way. Vettel, from 2007 to 2012, has grown up in different aspects and understands the sporting code of conduct and has learned to ignore what has to and take in what has to be taken. So here comes the question, can Seb make it a 4th?

The competition has risen, new contenders were born this year, many teams looked strong and lastly, the challenges what could be thrown was thrown this year, and the champion could take it all. It's not 20oo's where one can take the car out every season and win a championship. Let alone do it thrice, doing it once in itself is a big achievement. 2012 poised many new talents in drivers, who when  get a good car, will drive it to success. So a 4th in one side may be a 'no'. But the other way to look at it, yes. A 4th is possible. The challenges that drivers faced this season was so intense. Off-track and On-track. But if one can manage all of that and win a championship, why not another season of the same type?
Sebastian Vettel's 4th title is far away from now. It depends on the level of competition, cars and rules of 2013.

Fingers Crosssed! And hope Seb enjoys further success in F1. Afterall, he's just 25! He's got a long road ahead of him.