Showing posts from June, 2014
Show all

Scuderia Toro Rosso: Both Toro Rosso drivers Jean-Eric Vergne and rookie Daniil Kvyat have totally managed only 12 points this season. Their best result was so far has been in Australia in which they hauled half of the points they have today! JeV has finished just 3 out of the 8 races and Kvyat finishing 5 totally.

Austria was yet another disastrous weekend where both the drivers did not finish the race due to failures, however they showed good pace during qualifying. Starting the grand prix from 7th (Daniil Kvyat) and 15th (JeV) Toro Rosso's expected a strong race. But brake issues and the loss of balance caught Jean-Eric and his teammate out.


"I have struggled with the brakes from the beginning of the race. It's difficult to drive the car with such a considerable rear locking" Vergne was post race. "Problems happen, it's a shame that they occurred here but the new aero package is working well and we have a good car to face the next Grand Prix in Silverstone…
Post a Comment
Read more

Austrian Grand Prix through the lens 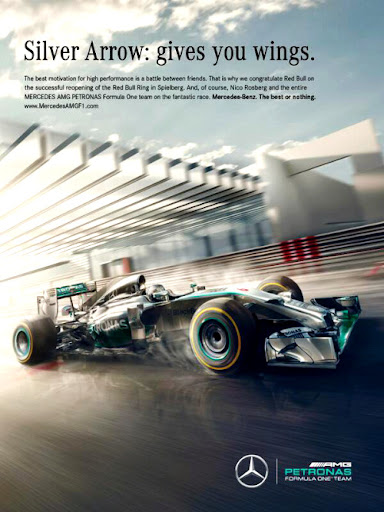 Lets start with a controversy! The above picture was from a deleted tweet by the Mercedes team. Yes, they ruled the track and yeah.. they might've been a bit drunk after the celebrations when they made this. But whoa! ease off Mercedes. That wasn't the right thing to do.


princess takes a selfie with the amazing crowds of Austria!


How's the mood in the world champions' garage? This picture sums up pretty much all their frustrations.


We've missed Mark Webber, haven't we? (I have most certainly not). Here's a fact you didn't know: Sebastian Vettel has retired every race that Mark Webber has been to! That is: 3 (Australia, Monaco, Austria)


Kimi Raikkonen on track. Can't have enough of the view behind! It's almost like we're racing at the Nordschleife!

Austrian Grand prix: Quite the pomp after a 11 year hiatus! (Mercedes, RBR, Ferrari, SFI and Williams)

The last time before this year the Austrian grand prix took place was way back in 2003. The grand prix was one to remember with something exciting happening each lap. Michael Schumacher who started on pole lead the race until the mid 20 laps after which he had to pit because of the rain which had started to drizzle. The pitstop however failed to go as per plan for when they refuelled his car, a wild fire started after the nozzle caught fire by a spark. After all extinguishing and controlling, Schumacher was sent out again after a 20 second pitstop to join third behind Juan Pablo Montoya and Kimi Raikkonen. The thrill of the race however was only after the pitstops when a mix of strategies saw Webber who started from the pitlane finish in the points, Jenson Button who at a point was following 3rd, finish 8th and a sizzling battle for second place between Raikkonen and Rubens Barichello. Staring the grand prix with 2 aborted race-starts and 4 laps under safety car, the 69 laps were the…
Post a Comment
Read more

On messenger with Arya Gandhi

"How do I start racing in Formula One?"

It's a naive, but a very valid question for someone who aspires to be in the pinnacle of motorsport. Well, the answer to that is Karting! The first and most basic step that everyone in today's motorsport field has spent at least 7 years in.
Mumbai boy Arya Gandhi is an Indian karting prodigy of Rayo Racing who started racing at the age of 11. Just like everybody, his first run in a go-kart was "just for fun" before he found out he went quicker every lap afterward. At 12, he had a go at racing professionally in the national series, and since then, his racing record has only grown to be more impressive!
In a nutshell-
He has been karting for 5 years Won the National JK Tyre Rotax Max Kart Open - 2011 Over the racing seasons, he has achieved 4 podiums He has been crowned AKOC 2011 champion in the micro max categoryHe made the big shift to Formula Cars in 2014, currently in Formula 4 while he continues to race karts. 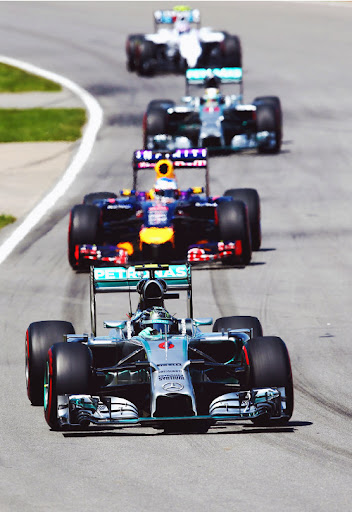 Rosberg, Vettel, Hamilton and Bottas all lined up as they go around 1/3rd of the track before the safety cars had to pull out.

Daniel Ricciardo, winner of the Canadian Grand Prix isn't much of a champagne lover. However, he doesn't mind getting soaked in it every now and then.

What happens when a formula one car slides sideways right in front of you while you're doing 250kph? Yes, it was a close miss for Sebastian Vettel when Felipe Massa flew in front of him after involving in a crash with Perez. (I am with the FIA on penalising Perez). Both drivers are safe and fine.

Jenson Button's car is torn apart and worked on by his engineers.

Guess the track walk paid off for Jev! He finally finished in the points in Canada!

The Canadian grand prix was the perfect palette of colors. The picture was given a splash of fiery red off-track battle between 2 teammates and moved onto a peaceful blue towards the end celebrating a 105th winner in 64 years. And created the masterpiece that 2014 was looking for since March!


The Nico Rosberg and Lewis Hamilton drama resumed in Canada after both of them fell out at the Monaco Grand Prix. Hamilton was keen to beat him at the Circuit Gilles Villeneuve, a track which has favored him several times in the last couple of years. However, Rosberg's and Hamilton's equally quick start off line meant the leader would be decided only after turn 1. However, being squeezed too much into turn one put Hamilton off line and into the grass, yielding his 2nd place to Sebastian Vettel who'd qualified P3 behind the Mercedes duo.

A first lap drama which involved both the Marussias brought out the first safety car period of the race. Later, Max Chilton was handed a grid penalt…
Post a Comment
Read more
More posts