The sizzle of Malaysia.. in 5 or more points Formula One fans who have grown with the sport might have reminisced back to those good old days when Michael Schumacher won with Scuderia; the days when the German and Italian anthems were played together. A fairly new Formula One fan must have flashbacked to those very stories told by those thousands of fans who had witnessed the beginning of a new era in Formula One, some say, the greatest era there has been. Well, Malaysia should have given those newbies, myself included, the real taste of what the Scuderia Ferrari team was always meant to be, only lost somewhere in the middle, but has risen from the ashes this season with a driver with who always looked like the one who could come closest to the man those thousands often used to talk about: Sebastian Vettel.

Here's the official classification of drivers: 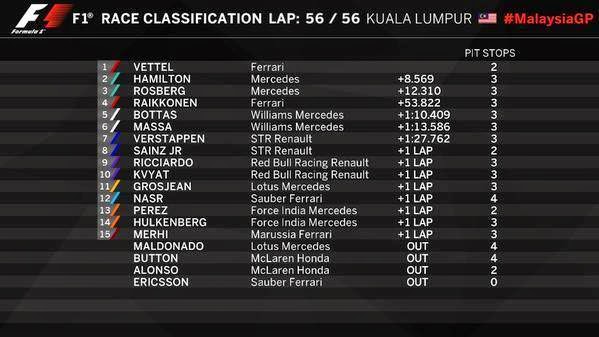 1. First off, always the winners- Sebastian Vettel hinted the entire paddock of Ferrari's strength back in Melbourne and has kept up to the impression he made. A stunning 2 stop strategy with very efficient pacing and brilliant tire management was the key to Ferrari's comeback. But more than that, over the winter, Sebastian Vettel's feedback (not my words, ask the Ferrari team members!) and the way he pushed the team is what ensured them a proper management and a team spirit that they earlier lacked: something that wasn't there since the Schumacher days.

2. But, there is also another Ferrari driver who was sidelined despite finishing 4th after a mind blowing run from the back of the field- Kimi Raikkonen. After a disappointing qualifying, none of which was his fault, things couldn't possibly get worse for the Finn. However, Formula One is a game of uncertainty. And therefore, couldn't guarantee him a smooth Sunday either. After suffering a left rear puncture (a result of a collision with Ericsson, Sauber), Kimi was forced all the way at the back of the pack, following which he wrestled his way gradually to finish top 4. Luckily, the safety car came at the right time to allow him to rejoin the pack. However, Raikkonen's pace too confirms Ferrari's quantum leap this season.

3. The Mercedes garage was pretty much confirmed about getting both their drivers to the front (ahead of Vettel) by the end of the race. But only very late could they realize that the task wasn't a cakewalk, as it has been previously. Vettel and Hamilton were on same and equally old tires (maybe a few laps older for Vettel) but they lapped the same times, hence making the delta very small for Hamilton to cover 10- odd seconds to take the win. On the other hand, Rosberg, who was stuck behind Hamilton on faster tires couldn't do much to reduce the gap between them. Of course, they blamed lack of balance and excessive understeer later on, but how much was it all true?

4. Max Verstappen has been the talk of the paddock, hasn't he? Young guy, presumably very young for Formula One, raised myriads of questions pertaining his ability to run a race distance with world class drivers. But with hair raising overtakes and well thought decisions, the 17 year old claimed 6th place this GP and silenced all the doubters. I am 17, and I was one of those many people who wasn't very happy with the signing of a teenager (bias, probably. But my reasons matched all the others') but I am willing to accept that Verstappen is a potential world champion. However, let's not forget he has a long way to go in formula one and just as any good driver faces, politics will bite him. The key will be for him to face it head on and move out; which is the make-or-break moment.

5. Penalty points and crashes. A plethora of those we had this grand prix! Firstly, Pastor Maldonado. Already earning his 8/12 total penalty points, he is just 4 shy of a race ban. After failing to stay above the minimum set time by the FIA ECU during the safety car period, the Venezuelan accumulated 3 points straight this weekend. However, he wasn't the only driver to earn penalty points! Nico Hulkenberg's crash with Daniil Kvyat of Red Bull Racing got him a single point while Sergio Perez too has gained one to add up to a total of three for the Mexican following his crash with Grosjean. Meanwhile, Romain Grosjean who jumped cars in the the pit lane will face a 2 place grid penalty in China.

6. McLaren-Honda's woes continue. After a terrible qualifying for the English team, the best Alonso and Button could hope for was a trouble-free race distance even if it means they would run dead last. Funnily to Button, they were even matching some of the cars at a point! But soon, both cars were retired due to technical troubles. Despite playing leading characters in the McLaren book of happiness, Button and Alonso continue to hail the team for the small improvements which seem to make them feel better in the car. Alonso also mentioned that the troubles were short term and by no chance was their relationship breaking down again.

In my opinion, this is the beginning of a new era in formula one. Vettel/Ferrari partnership reminds me a lot of Schumacher/Ferrari and we all know how that ended! 5 world championships, a lifelong friendship and a legacy to be followed. As a tifosi, we believe in it. And as a Formula One fan, it excites me to know the spirit of F1 is still there somewhere.


*Pictures do not belong to me, credits to image holders!