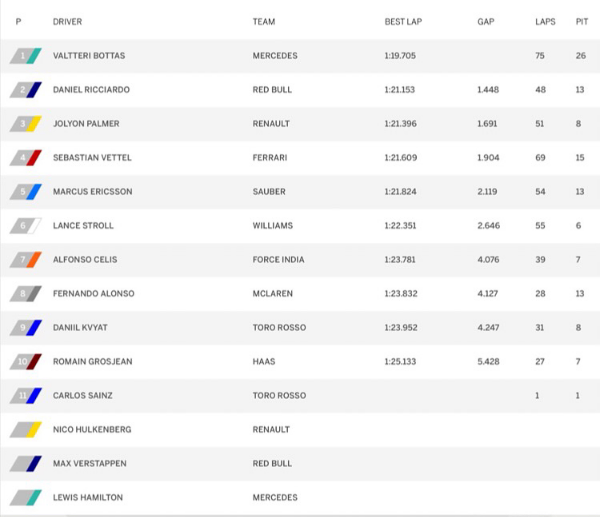 1. Valtteri Bottas set the pace on the morning of Day 3 using the Ultra Soft tires. Although the laptime was good enough to keep him at the top of the table, the gains between tires were significantly small.

3. Jolyon Palmer in the Renault caused the first red flag of the day after a spin coming to Turn 3. Towards the second half of the session, Palmer slotted into P3 with a run on the soft tires, completing a solid 51 laps in the Renault.

4. Williams' rookie driver Lance Stroll managed 55 laps in the FW40 before being swapped in for Felipe Massa to make up for the lost running on Tuesday. The 18 year old Canadian however spun into the gravel after the chequered flag, requiring recovery vehicles to retreive the car.

5. McLaren Honda's Fernando Alonso logged in 28 laps by mid day in a rather smooth sailing Day 3 for McLaren. 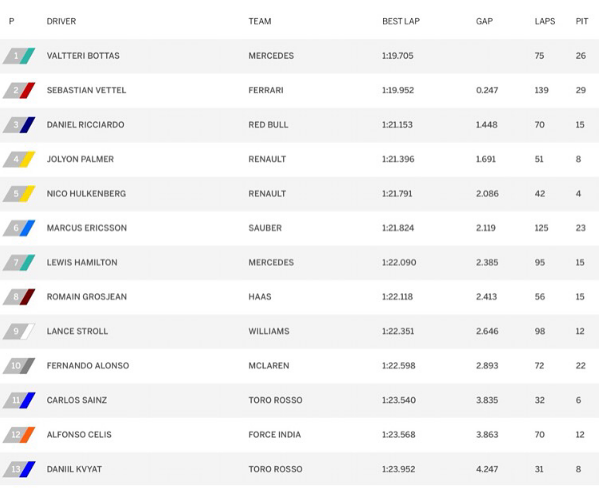 1. Mercedes and Bottas stay ahead of the pack for rest of the day with the Finn's laptime on ultra soft. With Lewis Hamilton swapped in for the second half, Mercedes attempted a full race simulation with the 3 time world champion, however, they were interrupted by 2 red flags. Hamilton's lap time was set on a soft tires and completed 95 laps on his run, allowing Mercedes to rack 170 laps with their drivers.

2. Scuderia Ferrari's Sebastian Vettel completed a solid 139 laps on day 3 and set an impressive lap time only 2 tenths shy of Bottas' time on a set of soft tires. Ending his first testing days with 277 laps under his belt, Vettel and Ferrari both feel there's "a lot of work" ahead.

3. Lance Stroll continued his second session to bring Williams' lap tally to 98. However, he also managed to bring out the 2nd red flag of the day when he crashed into the barries outside of T5, damaging the Williams' front end. This saw the English outfit to cut their program short for a second day in succession.

4. Carlos Sainz in the Toro Rosso managed only 32 laps at the end of the day after causing the first red flag by going off at Turn 4. Another red flag was caused by Sebastian Vettel when the Ferrari pulled up on the main straight with no power. This was dismissed as a reliability issue after Vettel talked about testing the new part with only 10 minutes to go, expecting a similar outcome.